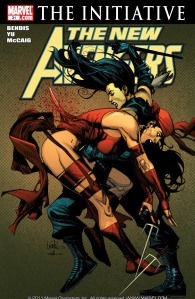 One great feature about the Marvel Unlimited app is the Discover section which brings together notable events and one shots for famous characters in their arsenal. For major event stories that take place over multiple issues and multiple lines of comics they give you a suggested reading order to keep you organized. While the story itself may not be 100% written to be a chronological story (They can be side stories that don’t affect the main plot of the event story but still affect a major character) knowing where the creators of the story want you to start if you want to tackle a particular story is a nice touch. One story line I came across was for Secret Invasion. To kind of mix things up here, I think I will be reviewing the Secret Invasion story from start to finish. The reason I say I think is that for all I know I may end up hating this story so to commit to reading a story that takes place over 98 issues would be silly on my part if by issue 12 I’m hating what I’m reading. Without further ado, let’s begin the Secret Invasion.

I’d really like to send my love and appreciation to the good folks at the Marvel Wiki site. It’s been a great starting off point for me when it comes to wanting to know more about characters, stories, and the people who make them. Hats off to the work they and their contributors do.

To start off, this comic, apart from the very last page, have nothing to do with the story we are about to dive into. From the intro on the first page of the comic it’s explained that what we are seeing is the finishing touches of the Civil War story line (which I definitely want to re-read before the movie comes out. I can’t wait to see Spider-Man in a real Marvel movie!) Taking that into account, what we’re seeing here is mostly cleanup. There’s not too much story going on but on the flipside you’re also not bored out of your mind. You care about the characters and want to see them overcome their fight against Elektra and the evil organization known as The Hand.

And hell, let’s talk about that ending.

I would expect nothing less from a Brian Bendis comic. The closing image is jarring. It evokes a feeling of paranoia. Someone who they thought was their enemy turned out to be someone completely different. An alien in their midst looking to cause trouble among Earthlings. If it could happen to their enemy, could people they consider their friends not be who they say they are as well?

Being that this came out in 2007 when America was well in the midst of their Islamic xenophobia this feeling of paranoia was most likely intentional. When you’ve been attacked you’re in protection mode. You don’t want to be attacked again. Anything and everything that gives you the remotest sense of danger you’re paranoid about. It’s a natural reflex which in and of itself is not bad but taken to extremes can lead to horrible actions on the paranoid person’s part as well as leading to the paranoid person being exploited by people looking to harm them. This was a great start and definitely makes this decision to read this story a good one (so far).

The artwork was great. The cover alone is quite jarring with the character Echo shoving a sword into the gut of who they think is Elektra. The character portrayals were great. You could get a sense of the emotions the characters were looking to convey in the story. I especially liked the concern from Jessica Jones (I can’t wait for the Jessica Jones show on Netflix!) when she inquired about Luke Cage, the father of her baby. Quite realistic.

I do wish there was some more substance to the story. This is nitpicking because the intro is pretty clear that what I am reading is the very end of another story line but this still felt quite rushed with no real substance. It was essentially a 20 page fight scene with a shock ending. There are no character arcs, nobody learns anything, you’re just coasting by until you can get to that last image.

If I had to nitpick about the artwork it would be that the artist was more concerned about the characters and not about where the characters were at. I never got a true feel as to where the action was happen. Apparently it was at some sort of ninja temple or something but the location was drawn in such an abstract manner that I never really felt a sense of scope or anything. If the action at hand has no real danger of harming the environment about them, it may as well be happening on a soundstage.

This is a good start for this story. While I would have liked them to have planted the seeds more in the previous story apart from one image on the last page of this issue, it is what it is. The last page alone is worth the read because it gets you interested in what happens next. It’s not perfect but that alone gives it good marks in my book. I rate the story a 7.

The artwork I’m conflicted on. While the character drawings were great, I wish more attention was given to the location where the action was taking place. This is nitpicking to be sure. Please don’t take this as an I hate the artwork rant. But what the artist did good could have been better if more attention was paid to the entire piece and not just the characters. I rate the artwork a 6.