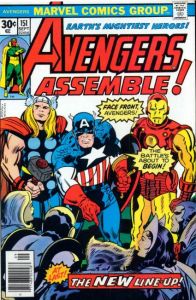 I wanted to be a little nostalgic today so I decided to see what Marvel comic was released the week I was born. From there, the cover that interested me would be the one I would choose to review today. I came across this issue of The Avengers and decided to give it a read.

This issue concerned the reveal of a new lineup of Avengers. Every now and then the bullpen at Marvel decides they need to add or remove members of the team to kind of spice things up. I like that they do this for the simple fact that the same group of people being put in the same type of situations can lead to repetition. I think of the Fantastic Four here. While I don’t hate that group and can read some of their issues and enjoy them, for the most part that story gets old fast because it is more of the same for each and every issue. You read one, you’ve read them all.

Whereas you take a tv show like The Simpsons for example, a show with a core group of characters that had quite a number of minor characters elevated in order to add more depth to what was going on. You can argue till the cows come home as to when the show jumped the proverbial shark. Fact is, if the show had stayed with the same format it had during its first couple seasons the show would not be on the air now. Not that the first few seasons were bad, there are some classics there. But the show needed to expand beyond its core cast in order to keep repetition from boring viewers. While you may make a pretty good argument about the quality of that show compared to where it used to be, the fact that it is still on the air says something about the formula they use.

Similar to The Avengers. While the same core characters will always be there in one way, shape, or form to influence things, the strength of this comic is the fact that things change up. New characters with new temperaments are mixed with established characters to create new tensions. You don’t have to worry about repetition boring you to death.

The art work is beautiful. I would call it classical if it were released today but this is the artwork that set the template for how we view these characters today. And the cover, man. The covers of comics were a lot like album covers used to be back in the day. Often times you’d have a cover that was completely bad ass that may not even have anything to do with what happens during the story at hand but it is still enough to get you to want to but the issue in question. This issue is no different. With Captain America clearly in charge, you get the sense that something great is going to happen. You want to dive into the story to see what action is about to happen.

While the art initially pulls you into the story, the story itself does its best to bore you to tears. Back before DVD’s of television shows were popular, television shows would commonly have one episode per season that were flashback episodes. They would take the tiniest thread of a story and pad the show with scenes from earlier in the show. The episodes, while they could be entertaining, were throwaway. They were used to remind you of successes past of your favorite characters. This issue is no different.

Now I wouldn’t have had too much of an issue with a flashback issue if there was something going on. Up until the last page the majority of the issue either consists of a newsman pontificating on the importance of The Avengers, old members reminiscing on their former life as Avengers, or the current team sitting at a table deciding who would be on the team. Whoever thought that would be a good idea deserved to be tossed out on their ass for creating such a boring horrible story.

Hank Pym was treated horribly this issue as well. He starts off melodramatically leaving the team because apparently he wants time off to focus on his knitting or something. By issue’s end, he’s suddenly back full force without any hesitation. I can see him reluctantly coming back just to make sure he could protect his wife but the way he comes back here just comes across like an episode of Days of our Lives. There was no real motivation for him to come back other than to allow the writers the chance to make The Wasp fawn all over him because isn’t that what women should do with their men?

There was just no need to have the issue set up like this. None. They could have just had the team members that wanted to leave make their exits and have Captain America or Iron Man bring in new recruits. I mean think about it. You read comics not just for the words but for the pictures on the page. Why did someone thing it was a good idea for a whole issue where people just sit there? Just because the last page promises action in the next issue doesn’t make this issue good. In fact it pisses me off. Why didn’t we get some problem that arises that allows the new members of the team prove themselves as Avengers instead of sitting back and watching a committee meeting decide? Horrible.

Ignore this issue. While it has a great cover, there is nothing of value on the inside of this comic. If I had not come across this issue with my Marvel Unlimited subscription I would have hated myself for actually buying it because nothing happens. Nothing at all. It’s like C-SPAN made a comic of a day in the life of the House of Representatives. Unless the Speaker of the House uses his gavel to attack people with a hidden cosmic ray in his quest to take over the world, nothing of note happens worth making it a comic. Same with this issue. Voting on new members of The Avengers is just silly and pointless especially since there is no action whatsoever. Now a story that involved taking a new person out on an adventure, have that new person prove themselves to the team, and then get voted into The Avengers would be a smart thing. It keeps you interested as well as goes about introducing the new members of the team. But what do I know? I give the story a 2.

What saves this work is the art. Despite being drawn in 1976 the art doesn’t really give its age. Apart from shortening the male newscasters hair it could pass for a modern piece which speaks well to the talent of George Perez. The art takes what would be a comic that didn’t deserve a spot in a landfill to a comic that at least visually you have to see once. It may not be classic but it is still well done. I give the art a 7.