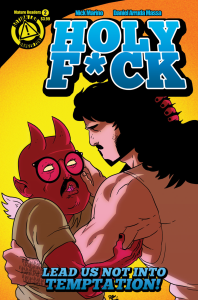 Imagine my surprise when I head to Twitter and see that I have a message from someone. I check it out and it was a message from one Nick Marino. It took me a moment to realize that this was the Nick Marino who made the comic Holy F*ck which I had just recently interviewed. He thanked me for reviewing it and hoped I would finish the series.

I have to tell you his tweet felt good. Knowing that someone who actually created a work that I reviewed and liked would take the time to thank me makes all this worth it. I loved the first issue. Sure I had some criticism but I think any piece of art can and should be critiqued. He doesn’t have to agree with anything I have to say mind you but as a writer myself, I can say that it is possible that as a writer you end up seeing your work through a bit of tunnel vision. You need new insight, a fresh set of eyes, to see things you’re not seeing.

Anyway, in honor of him tweeting me I figured I would finish each issue of the series and post my thoughts on the page. Independent comic artists need our support and if even one person were to buy a comic due to my thoughts than that would be another reason why this is all worth it.

Issue two picks up where we left off with Jesus and Satan making out. Once they break their tongue lock Satan gets down to business and explains that Isis and Zeus were behind a plot from long forgotten gods to bomb the Earth so they could save it which would have people worship them again.

From there we learn that Zeus and Isis have discovered that Jesus and Satan are together and they plan on doing something in order to stop them. They decide that kidnapping the nun that found Jesus would be a way to stop them. The nun is kidnapped when she heads to the store to pick up stuff for Jesus and Satan. Once they find out, they arm themselves to the teeth and go to find her.

As I mentioned in the previous issue, this is a simplistic story. While it deals with themes that could be explored more in depth, like a Charles Bronson movie from the 80’s, it’s quickly getting to the point where the shit hits the fan. I was a little hard on issue one in retrospect. Yeah, these themes could be dealt with in a little more depth but that’s not what this story is about. It’s there for the comedy. Yeah, it’s not something everyone will enjoy but that is the great thing about comedy. Anything can be funny, you just have to know who your audience is. George Carlin said it best so I will leave it for him to explain.

The artwork once again helps contribute to the silliness of the piece. If the art were drawn in the manner of religious tracts or something like that you would lost the impact of the comedy that is happening in the story. It is crudely drawn and quite simplistic but as I have mentioned, when attempting something out of the ordinary, you do it to serve the story you want to tell. If they drew it like a Steve Ditko or Jack Kirby piece, a lot of the humor would be gone. Having it drawn in the silly manner it is helps contribute to the piece.

I owe Nick Marino nothing. I don’t know him apart from the one tweet he sent me. And while I was a little critical of the first issue, I still love the piece overall. Issue two helps flesh things out a little more. You end up getting your feet in the world that is being presented to you which makes some of the shock from the first issue wear off. I stand by my comparison in the first review that this comic is like a fart joke. Again, fart jokes, when done right, can be quite funny. They’re not subtle. There’s no depth to it. But it makes you laugh. That’s what this comic does. Being that you get more acclimated to what is going on, this issue gets a better review than issue 1. I give the story a 7.

The art goes a long way toward making the story enjoyable. To play jazz, you have to know how to play standard pieces before you have the skills to improvise. The art in both issues so far is jazzy in that sense. It’s sloppy and it comes off like a kid drew it but with how it contributes to the overall enjoyment of the piece you know there was a lot of care in how the art was put together. I give the art a 9. The reason for the better review than the last issue is the sheer brilliance in how simple it is. If it were realistic or drawn to be like pictures in religious texts it would take you out of the story. This is good stuff.