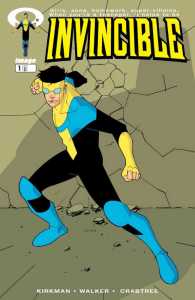 One of my favorite Pixar movies is The Incredibles. For an origin story about superheroes, it is by far the greatest origin story you will ever come across. Origin stories are real tricky beasts since it seems every superhero movie seems to have to have an origin story these days. While they can be entertaining if done right, the sheer amount of origin stories out there makes it so that the people involved in making the story have to be quite inventive in order to keep people entertained. We’ve seen it all.

Invincible is from Robert Kirkman of The Walking Dead fame. Mark Grayson is an average kid who’s father happens to be a super hero. The issue details with him discovering his powers and how he becomes the eponymous Invincible.

The concept is worth exploring but the issue here is really rushed. We start off with the main character in action for two pages then go back four months to when he first discovers his power. We skim over the fact that his father is a superhero and his mother ends up treating it as if he were an investment banker. What could have been a nice little exploration of a family that has super powers is just glossed over quite fast. The mother in fact seems to simply be there to acknowledge the fact that they have powers. There’s no real point for her to be there.

We also get to a point real quick where Mark discovers his power and magically decides he wants to be a superhero. With the help of his father he even gets his own outfit and by the end of the issue is fighting crime. There is no exploration of Mark’s daily life. Who his friends are. We just get these real quick glimpses into his life that are jarring to say the least and give you no real indication of who is who and what the hell is going on. What this issue needed was more character development. While we get some real crumbs from Mark as to what kind of person he is, there’s no real motivation for you as the reader to care about anyone. Bad things happen and Mark as Invincible goes to stop it. Whoopee. You can see that on the news with Phoenix Jones in Seattle doing the same thing.

The art for the characters was pretty decent. The only real issue I had was with locations as they were drawn in the panels. The lack of variety in locations, the fact that most locations were simply drab, single color affairs, made for a miserable viewing experience. In a lot of ways this issue is trying to bring us back to a different era in super hero comics but they just fail to capture the spirit of said comics. With everything as drab and stale as it looks in this issue, I think that it may have been better served with the same artistic treatment Robert Kirkman and his fellow artists used for his comic The Walking Dead by drawing this comic in black and white. Whether the intention was to save money on ink or to just focus on character design, the art is too drab for me at least to really enjoy.

And as far as homage goes, I think they could have done a little more to make everything appear a little more original. There was a villain Invincible faces that really looked like Sandman from Spider-Man. If Sandman and The Thing had a baby, it would be this guy. (Try not to imagine that conception. Ooops, I just made you think of it. Good luck with that.) Mark’s house also looks a lot like Peter Parker’s home when he lived with Aunt May. Admittedly I may be seeing things that are not that but I can’t honestly be the only one to think that. Something like that should have been thought of and addressed. Homage can be a beautiful thing. It harkens back to other stories while being something completely original. This story just wants to set their characters in the world that others created.

One more thing about the story. Mark’s parents are way too comfortable with him being a super hero. Way too comfortable. I have kids myself and I know that if one of them were to become a super hero I would do everything I could to stop it. It doesn’t matter if they are impervious to pain. It is well established with ANY super hero that they have a weakness somewhere. I would not want to see my kid in danger even if I knew my kid could really help people. Yet the parents are talking to him throughout after he discovers his power like he finally learned how to ride a bike. I would at the very least expect them to be a lot more hesitant to be a super hero than their reaction was. Totally unbelievable.

Robert Kirkman has done better. Much better than this. While this is not a horrible comic, I certainly have read far worse, there was too much left on the table that could have been explored that was not. It’s certainly a decent read in the sense that it gives you an idea of Robert Kirkman’s progression as a writer before he hit it big on The Walking Dead. But this issue alone was not enough to make me want to know more. It’s a good concept but executed quite poorly.

The art was too ordinary for my tastes. Just drab and dull. You would think that a story that dealt with superheros would have more bold colors at least but that did not happen here. Just drab, single colored locations along with somewhat decent character designs. The art could have saved this comic but it failed. Badly.