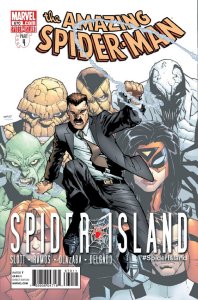 The spider plague is getting worse. People are going from infection to spider powers to turning into actual spiders. Things are getting to the point where there may be no turning back for our heroes. What happens from here?

The story so far has done a good job of showing the feeling of hopelessness you have to imagine goes through the heads of actual heroes in everyday life when they’re presented with a scenario that seems like is insurmountable. The story opens with Spider-Man witnessing his girlfriend Carlie, The Shocker, and the Mayor’s Spider Task Force all turning into actual spiders. Think about it for a moment. How would you react if you were in a situation where a loved one went through a physical change and you had no way of stopping it? The helplessness you would feel could be overwhelming. How in the hell do you help? But I think that is the key to this story and to super hero comics as a whole. When you’re presented with a bad scenario, no matter how bad it may seem or how bad things get, you just keep fighting.

I forgot to mention something that happened last issue. The last few pages were illustrations made by Marvel artists which honored the tenth anniversary of 9/11. (They’re hauntingly beautiful pictures. Well worth the read of that issue alone.) What I remember most vividly from that day were all the cops and firefighters who, despite being frightened out of their fucking minds, ran into hell to save people. Cops and firefighters that survived told you that they knew pretty quickly that they were looking at a situation that was pretty hopeless. Instead of turning tail and running, they saved who they could. I think that is the key when it comes to why people come back to comic books. What is it about these heroes that we like? I would have to say that it’s the escapist thrill. When you watch the news and see war and strife everywhere, you see political candidates saying more and more the most bat shit crazy things you never imagined hearing a candidate say (Fuck the Republican Presidential Candidates. End rant!), knowing that in some world, even if that is the world of imagination, there is a hero that will defeat the bad guy and make the world a better place makes going through your day much easier. I think this can also explain why we’ve seen superhero films capture our imaginations like never before. Machinations in the world are in place that are making our lives less safe everyday. What better way to get a break from that by spending two hours in a movie theater seeing Superman defeating Doomsday.

(I had to include that trailer. I didn’t care for the start of it but once Doomsday hits and Wonder Woman saves Batman and Superman, I geeked out. The gauntlet has been thrown.)

Back to the story. The issue starts off great but goes off the rails in the middle just like pretty much every other issues in this story. Too much is happening that can be addressed effectively with the real estate the comic book is offered. You’re switching from scene to scene without any real idea of what is happening. It’s like a story being told in Morse code and you’re only getting the gist of what is happening. You have a scene where Flash discovers that Eddie Brock is saving people. He’s undercover with The Queen as the Spider King and is dispatched to kill Eddie. Flash wants to save people but the Venom suit wants to kill it’s former host. This is a good story element but it’s not really addressed. You may argue that we have a few more issues left in the story including two specifically dealing with Venom and while that is true, I think it was poor form to have a story include something big like the conflict Flash Thompson is having with the Venom suit when he’s supposed to be capturing Anti-Venom in order to save New York. We also get Mayor Jameson getting the Spider Slayer out of Rykers to help with the problem. According to exposition, the Spider Slayer was responsible for the death of Jameson’s wife. Fine. Great story element to explore. But they waste that opportunity by having Jameson quickly enter stage three of the virus by turning into a spider. He even ends up killing the Spider Slayer by the end of the issue when he is completely transformed.

That’s another thing I hope is addressed. The human body, if it were to make a sudden physical change as described in the story would not suddenly just go back to normal once you found a cure. You grow extra eyes. Once you’re given a cure those eyes don’t pop out of your head and dissolve into dust. You would still have extra fucking eyes. I want to see how it’s addressed but I have the sneaking submission that they’re not going to have a decent explanation as to why and how people are brought back to their normal selves.

This issue has its weak points but when it’s working, it works well. As I mentioned, it did a great job detailing the determination you expect heroes to go through when encountered with a scenario that may seem hopeless. I really wish more time was given to let the story breath. The writer is going way too fast for my liking which is giving me a case of whiplash when you’re going from scene to scene to scene. This is definitely an example of the dangers of stories that have too many characters. Trust me. With my novel Time to Play the Game one critique I would offer myself was that when I faced a scenario where I had major characters tied up in another bit of action I would throw new characters at the scene I was writing. While I don’t think the results are bad by any means if I do say so myself (I don’t want to toot my own horn but…toot toot), I have to be honest that my work had major problems. But any writer is going to have them. Whether they be a no name author like me or a major writer like Anne Rice, you will find any writer that will find problems with their work each time they pick it up. With that in mind, it’s wise for any writer worth their weight in salt to remember that when working on their current pieces. When it comes to the number of characters in your story you should never feel inhibited to including a cast of millions if you want to but the more people you add the more business you have to give them in order to justify their place in the story. That is what the big weakness is here. We’re having scenes introduced with some characters that could be great but aren’t totally fleshed out.

The art work is just not to my liking. My apologies to the artists involved on this piece Humberto Ramos, Victor Olazaba, and Edgar Delgado. It’s too anime for my tastes and is frankly sloppy. The opening scene for example was rough to get an idea to start in regards to placement of the dialogue. If it wasn’t for guided view on the Marvel Unlimited App, I never would have guessed the path I was supposed to take to read the dialogue in order. The characters are drawn just slightly off which is just taking me out of the story when it shouldn’t be. Not a fan.

One more bit of business. As I mentioned I have a book. I want you to read it. If you want a free copy of it in e-book format, you can email me at gameauthor@gmail.com and I will send you a free copy. The offer lasts till the end of the month, 12/31/2015.