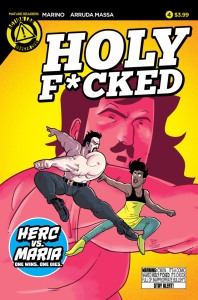 Here we are with the final issue of Holy F*cked and I have to make a quick comment on the cover. Take a look at it for a moment. Does it look familiar? Well, it should because it is a straight homage to an old Daredevil cover that Frank Miller drew. 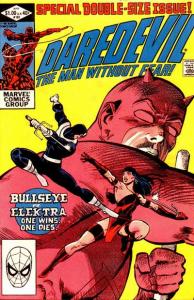 If you’re going to rip off someone, you rip off from the best. And as Bobby the Brain Hennan used to say, it’s not stealing unless you get caught. Great cover.

So on to the comic at hand. The New Apostles have been defeated. Hercules reigns supreme and appears to be on his way to finally defeating the man he thought killed his father, Jesus. Satan is in the hospital in labor pains ready to give birth to the child of our lord and savior. And Hercules has such huge nipples that a cow would probably be offended by them and ask him to wear a shirt.

So I have to say I called it from the start. One thing I noticed from the beginning of the story was that Hercules was hell bent on blaming Jesus for the death of Zeus when it was in fact Maria who killed Zeus due to her lack of faith. Nick Marino all but confirmed this to me on Twitter when he mentioned that I was the only reviewer to point out that Hercules was mistaken in his belief. Score one for me! (As a married man you learn to take victories whenever you can.)

One other thing I liked as well was the fact that they never outright killed Hercules. Too often in comic book movies or just plain comic books today, they have these elaborate deaths for the villain of the story without putting much thought into what story elements you’re taking off the table once you kill them. Christopher Nolan did great with this in The Dark Knight. It’s not my favorite Batman movie and not my favorite version of The Joker by any means but at the very end, instead of having some elaborate death for The Joker, The Joker is simply captured leaving room for his reappearance in future films. Obviously those films won’t happen since Nolan decided to make it just a trilogy but I think you get my point.

Hercules was a pretty monumental threat here. For him to be taken out permanently in the story would be just plain wrong for all the buildup he’s been given. The story ideas of what could be done with him in future issues are pretty much limitless. What if he were able to wrangle the other gods who fled Zeus for a last stand against Jesus and Satan?

Satan has a baby and it’s a boy. I don’t know where they’re registered but this was the feel good moment in the story. For the silliness we’ve encountered so far, I still felt a connection to the characters that once everything wrapped up in their favor, it was great to see Jesus and Satan have that moment with their new son Rad. I don’t know how in the hell Satan got pregnant or was able to give birth being a man and all but hell, it was great to see them grow together as a couple.

So ends another Holy F*cked series. This series was pretty much straight on action from the get go. The other story was similar in a lot of ways but did add in the great bit about faith. This was the Chuck Norris ass kicking story with no pretense of being anything else and it is great for being it. What I encourage everyone to do is buy this comic. There are seeds here for a dive into a funny world that can only be explored if sales of these comics demand it. If you like goofy comedy that’s well written and comes with amazing art work, this is the comic for you.

One thing I’ve discovered since I’ve started this little journey is the fact that the general public’s perception of comics is really quite love. If it doesn’t have a Marvel or DC logo on it, then it must not exist. Yet we see television shows and movies coming out each year based on comic books that most people would not assume were originally comics. While I agree with Steven Speilberg about comic book movies having an expiration date at some point, when you factor in the idea that comic books have no set genre, you really have to question when that date could be. There are autobiographies, history comics, religious comics, romance comics, action comics, comedy comics; any genre you can think of, they make a comic for it. It really is a true American art form that allows folks to, not only with words but pictures, to express any idea that can come to your imagination. An idea like this may not work as a regular book. The artwork really does wonders with the story in showcasing the fact that it is meant to be silly. Holy F*cked is why comic books are so important in our culture. It may not be Les Miserables but it is one hell of a story and deserves your support. (Damn, this sounds like a PBS pledge drive.)