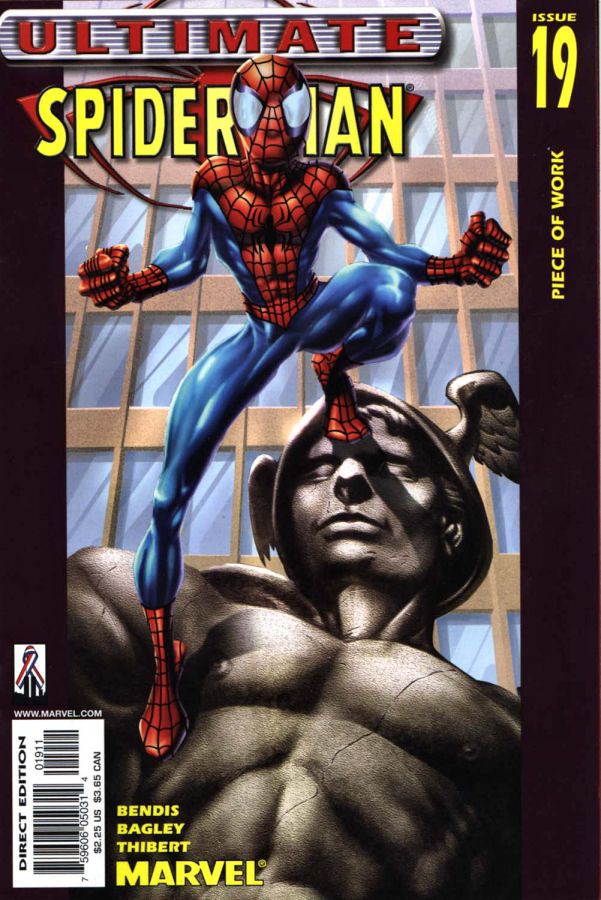 We pick up where we left off last issue with Peter close to being discovered by Aunt May. While he finds a way to get out of the situation without being discovered by his Aunt, it begs to question the big step he took to avoid being caught. He bolts outside and climbs up the side of his house without a mask and the pants he uses while he is Spider-Man with no mask. If he were truly looking to keep people in the dark about his identity, a move like this would be the dumbest thing you can do simply due to nosy neighbors. While it could be argued that he only did what he did to get out of his current situation, that he didn’t have time to think long term, the problem I see with that is little things like this are bound to happen again. And again. And again. If this is the life Peter Parker wants, he has to be able to react at a moments notice for situations like this to arise.

Now we get an explanation as to what motivates Doctor Octopus. Seems he’s confronting Justin Hammer because he thinks Hammer is to blame for him being in the metal device that gave him the extra arms. While there is no truth to that thought, at least it is something. What I would have liked to see in previous issues was some actual ground work establishing Justin Hammer and Otto Octavius’s relationship prior to the explosion at Osborn Labs. There was really no hint that Doc Ock was spilling corporate secrets so having this story kind of shoe horned into the story like it has been is the sign of poor planning. As a writer, if you’re going to be establishing a story like this somewhere down the road, whether that be in further chapters, further issues, or further books, you have to plant the seeds for that story somehow. Whether it’s one line, one scene, something to introduce the fact that two people have a relationship that you will be exploring somewhere down the line is important for the story to ultimately make sense. If you’re not taking the time to do this, you’ll be sitting back like I was during a couple issues this run wondering how the hell people who’ve never met before now suddenly have a long standing relationship.

Also, if Doctor Octopus really feels that Justin Hammer is the cause of his disfigurement, we don’t know the reason why he feels this way. If there had been some scene establishing a link between Justin Hammer, Doctor Octopus, and the metal contraption which is fused to Doc Ock’s body then I’d have no issue with the story. We don’t have that here. Justin Hammer to date has been established as making Norman Osborn look like the most compassionate billionaire in human history. He’s an evil man who deserves everything that is coming his way. Yet when it comes to the story at hand we have no history of this guy. We’re basically at a point where we don’t like him simply due to some of the experiments his company have created, not due to any direct actions to characters already established in the story. This would be a non issue again if there had been some basic setup, a line, a scene, something establishing Hammer and Octavius. Without that foreshadowing we have two people fighting just cause.

One enjoyable part of the issue was how things are wrapping up nicely. The final scenes of this issue played out quite nicely and you really got the feeling that Act 2 of the story is wrapping up and you’re heading into Act 3, the grand finale. Stories like superhero comics, action adventure stories, science fiction epics, work best when they follow the traditional three act format. Does that mean everyone needs to follow the same formula? Of course not. The problem I see comes when you have writers that aren’t exactly masters of the craft trying to break the formula to do something else altogether. Writing is an awful lot like music in the sense that you get better with practice. To try a complicated piece of music, to try something that breaks the rules of music in a way to try and create something different, you have to know the rules going in. You have to start with what works before you move on to something more complex. Being a fan of Brian Bendis, he is quite capable of breaking the rules to make a much better, complex story than the standard yarn. Not every story needs that treatment though and you roll with whatever story comes your way. For this story, I’ve appreciated that it is wrapping up quite nice.

We’re reaching the end of our time with Doctor Octopus. The story has been pretty enjoyable so far but not without some major flaws. Overall we’re seeing Peter learn more from his mistakes which is making him better at his job so for that I can’t be too harsh with this issue. This is a mediocre issue at best. It’s easily forgettable but not Punisher/Eminem level bad. I really think this story had some major potential that was squandered by poor planning from the outset. Writing comics is hard work. You’re not going to be perfect when it comes to long term story planning and continuity. When elements of story are not explained or missed completely during this process it does make the story suffer. In this case that is sad because it’s not a bad story at all. With just a little bit of work it goes from frustrating to a pretty intriguing story.