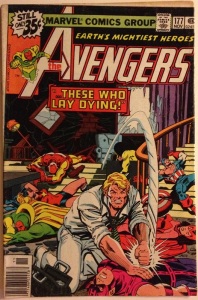 The Korvac Saga comes to an end with an epic showdown between The Avengers and Michael Korvac…in a house in the suburbs. You read that right. An epic showdown…in someone’s house.

Why? With all the power at his disposal in the world why the hell would they keep the story in the house and make someone’s living room the site of a doomsday battle. Why not take to the skies? Why not take the battle into space? I would never see Doctor Doom battling The Fantastic Four at a Wal-Mart, why would the writers think a battle of this size was all right to have in someone’s living room?

That is the big problem I have had with this series. Don’t get me wrong, the basic premise for the story is great and something I would love to see tried again. (Maybe they have. If they did post a comment at the bottom of the page and let me know.) The idea of an evil being that for whatever reason has a transformation, a transformation which gives him unlimited power, having a plan to rid the universe of evil, is confronted by a group of heroes, battles them, and in the course of a battle has even more enlightenment. With that enlightenment, he ends the battle and kills himself. I like that idea.

The execution in this story though was bad. You can just imagine someone gave this idea to the writing team and told them they had to come out with the series within a month. Jim Shooter, David Michelinie, and Bill Mantlo all have reputations that speak for themselves. Jim Shooter was the Editor in Chief for Marvel during some of the best runs for character like Daredevil. David Michelinie introduced the Marvel Universe to Venom. Bill Mantlo created Rocket Raccoon. (In doing research for this I learned a little more about Mr. Mantlo and will speak about it at the bottom of the page.) While I have been critical of the story, and rightfully so, the work of these writers speak for themselves as to their talent. They know how to write good stories. It didn’t happen for The Korvac Saga.

I don’t know, maybe I should just chalk it up to when the story was written. That would be nice to do but I feel that is wrong. Bad writing is bad writing no matter who is doing it. And no matter the talent of the writer involved, with the sheer amount of content comic book writers have to put out on a yearly basis, there will be clunkers.

What can a writer of any sort learn from this series? To me it would be planning. This story suffered when it would take characters like The Guardians of the Galaxy, have them show up in the first issue and present it as if something big is going to happen between the two teams when all that happened is the Guardians just sit back in a house in the suburbs that Tony Stark bought for them doing not much of anything. The story line reason they were there was that Korvac was attempting to kill a young Vance Astro which did not happen. Korvac never mentioned wanting to kill the younger version of the Guardians team at all when he was in the story. The only interaction he had with the Guardians apart from the grand finale was flashbacks to the story that started all this in Thor Annual #6. If you’re going to introduce characters in your story and promise they will be involved in a particular story line, make sure that happens.

I do not recommend this. It’s been done better in The Avengers: Earth’s Mightiest Heroes cartoon show. If you have to know this story, watch that show. It’s not a bad idea for a story by any means. There are some great moments in the story but overall, the execution is just horrible. You will have better uses of your time.

Now for Bill Mantlo, the creator of Rocket Raccoon. In 1992 he was involved in a hit and run which left him permanently brain damaged. In order to get the rights to use Rocket in the Guardians of the Galaxy movie, Marvel paid Bill’s family a nice sum of cash to help for his on going care. But on going care is not cheap and any little bit helps. Groups like Humble Bundle have been great in having proceeds for sales they make go towards The Hero Initiative which sends money to folks who have worked in the comics industry who need help with medical expenses and other problems they cannot take care of themselves. Too often, creators will come up with a great character only to have to sign all rights to it over to a major corporation and they end up destitute. Now most folks go into the industry knowing how the game is played but for creators like Bill, someone who has created a character that we are still enjoying forty years after his creation, that’s money he would never see that could be used to help his medical expenses.

We have the ability to help. If you click this link, you will head to Greg Pak’s website where he has a link showing you where you can go to help pay for his medical bills. When my mother was alive, the last decade of her life she dealt with non-cancerous brain tumors that had her rely upon constant medical care to help her with everyday things. Bills pile up. Comic book artists and writers, creators of characters we enjoy for years after their creation, deserve our thanks especially in their time of need. Head to that link and help him out. You can also find a site on Facebook created by his brother that will give you updates about him.