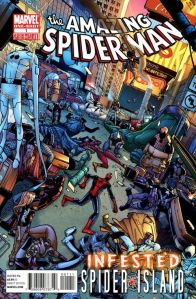 I ended up breaking my streak and had a couple days where I didn’t produce any content. Oh well. Streaks have to end sometime. But the important thing to do when a streak ends is to pick yourself up and start another one.

Despite the fact that I don’t recommend reading the series, The Korvac Saga was a great education for me. One rule of writing is that any writer worth their salt is also going to be an avid reader. No matter what they’re reading, it’s going to be educational no matter what the story is about. As writers though and I am certainly guilty of this myself, you tend to want to stick with writers you know and love. Even if they write something not up to their usual standard, you are more likely to give them a pass than you would with a writer you have no connection with. In fact, you’re more likely to not finish the work in question if you are not familiar with the author’s work and don’t find yourself liking it. Taking the time to slog my way through The Korvac Saga was a great exercise because I got to see what can go wrong with any story. For as much as I criticized the work, I know if people went through my work with a fine tooth comb they would find I was guilty of similar if not worse writing sins than what I found. So while I certainly didn’t enjoy the work, there was plenty of value in getting through that piece.

Once I completed it I thought what should I do next? Do I move on to individual stories or do I take the time to find another event story to critique? I chose the latter. I saw that the Spider-Island story was comparable length wise to The Korvac Saga so why the hell now? Here begins the Spider-Island story.

We start off with what turns out to be a bad guy monologuing about bugs. He starts off talking about the butterfly effect, not the horrible Ashton Kutcher movie but the actual theory, then proceeds to tell himself that he’s released nests of bugs around town. Then he proceeds to tell no one in particular that his name is Miles Warren and that the whole town is involved in his science experiment. This is a scene that may look good on paper but picturing it happening in real life you just don’t see it. Yeah, people talk to themselves I guess but the point of this scene was to introduce to the reader that the bad guy has started something evil. Everything that was said could have been used in a thought bubble and not come across as nutty as this does. I get that they want to portray this guy as nuts but you can still doing that while giving the scene a sense of realism.

Next up we have a scene set in a high school where some bullies are teasing a fat kid. Apparently they wanted this kid to skip a class so he would fail a test. The teacher of that class graded on a curve and if this kid, apparently a smart kid, failed, the bully would end up with a slightly better grade. Maybe it’s the father in me but I think that the bully put more thought into not taking the test than he did in actually taking it. Anyway, the fat kid ends up reaching his boiling point. In what is too often a reality, you find out that because this kid has been bullied for so long, he’s not thinking rationally and he’s brought a gun. He’s going to give the bully the ultimate payback. One of the bullies friends sense this, spider-senses it, and punches the fat kid who goes flying and lands head first into a locker. The kid is dead. The bullies friend bolts. The last image you see is a cop car and the laughing face of the bad guy.

Next we have a man holding his children watching his home burn. Seems he says he has spider powers too which would explain why they are safe. Intermixed with this you see Spider-Man saving a family. Turns out that family was involved in another fire. The fireman thanks Spider-Man and comments that it’s too bad that he couldn’t be in more places at once. We head back to the man holding his children and find out his neighbors died. It’s a nice little scene showing the limitations of any superhero. While early comics tried showing most heroes being accepted without question by the general public, you would have to think the random joe who had something horrible happen to him or loved ones would have a secret hate for them for not being around to save him or his family.

From there we meet up with Cloak and Dagger. They are in pursuit of bad guys who end up having spider powers themselves. The bad guys escape, leaving Cloak and Dagger wondering what the hell is going on. We end the scene with Miles Warren, the ultimate bad guy, meeting up with the man who escaped Cloak and Dagger. Not much meat to this scene but it leaves a little hook for something to happen in the story. It makes you want to see what Cloak and Dagger will do once the fit hits the shan as they say.

Then we get to the meat and potatoes of the story. We see Peter Parker in a training workout he is having with someone named Shang. Seems Tony Stark gave Shang some magnetic boots to help Peter with fighting wherever he is at which was nice to see. It was silly from the beginning to have a bookworm like Peter Parker after the spider bite suddenly become an ass kicking machine. You would think there would be some training involved so little things like this was nice to see. Once Peter leaves, a mysterious woman named Ms. Carptenter shows up. Shang and her discuss whether Peter will be ready when the spiders come. Foreshadowing. This is how you do it.

We shift to the past where Aunt May is talking to a neighbor about how she and Ben had just adopted Peter after his parent’s death. Suddenly, Peter is about to be hit by a car which she prevents. She straight up spanks his ass telling him that he could have been killed. At that point he tells her he hates her because she is not his mother. She tells him she loves him regardless and will always be there for him. Peter tells her he thinks she’s lying because grown ups lie like that. She promises him her word is her bond. Beautiful scene. Peter has always been devoted to his Aunt May and, under the circumstances, you can totally see why with scenes like this. It would be hard for any kid to have to deal with their parents dying and moving in with relatives he may not have known much. This little scene makes you as the reader love Aunt May more.

Next, we are at the home of Jay and May Jameson. I never knew that Aunt May ended up marrying J. Jonah Jameson’s father which is a funny little twist. They are at a family dinner where they announce that they are moving to Boston. Being a stereotypical New Yorker, JJJ reacts as if his father said he wanted to make it with a farm animal.

We shift to a few weeks later where Peter, Aunt May and others are finishing packing Aunt May’s old him. Mary Jane Watson comes over and Peter gives her a guided tour of strange things that have happened in the home with various super villains. You get a real sense of the history of the place. While the scene comes across like a flashback episode from an 80’s sitcom, it’s effective in showing that Peter and Aunt May had a unique life in the place.

From there, Peter gives his Aunt May a gift. A Red Sox hat. Then they hug with Aunt May telling him she’ll always be there for him. I loved that. Granted it works on a purely nostalgic level like the last Rocky movie, Rocky Balboa, did, but that worked for me. Coming at it as a first time reader, I am satisfied that they would understand that Peter and Aunt May really love each other and have a long history together.

This was a pretty good start. It doesn’t kick off the story in a traditional sense. We get just glimpses of little events that are happening throughout New York of what this mad scientist has done but it’s enough to intrigue you and keep you wanting more. It’s not a classic in comics history but it is still something I would recommend, flaws and all. The Aunt May part of the story was particularly well done and, depending on your knowledge of the characters, should leave you with a smile on your face once you’re done with the issue.