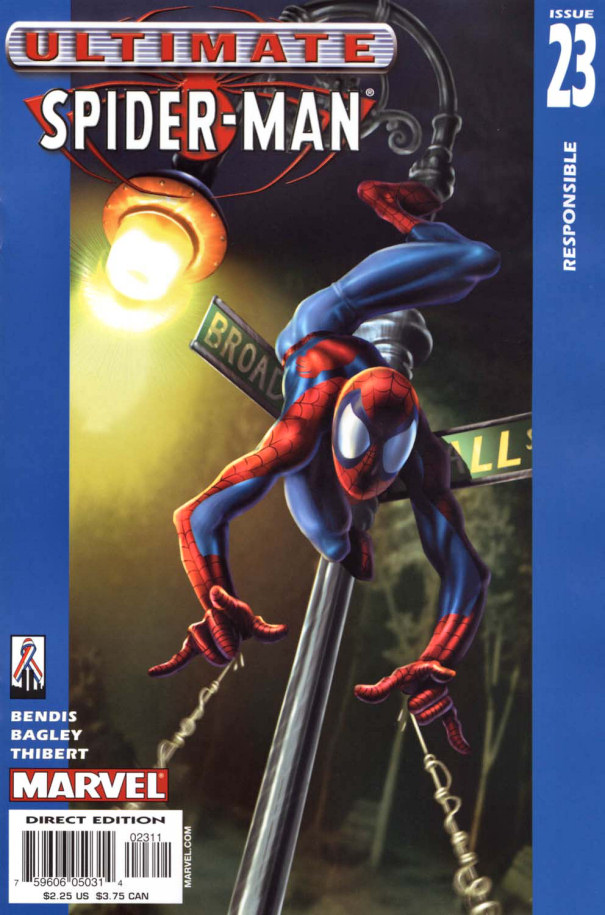 We left Peter Parker with Norman Osborn in his study after Norman had injected himself with the chemical that made him the Green Goblin. That was one heck of cliff hanger if you ask me. One aspect of the Ultimate Spider-Man stories that I have loved have been the way Brian Bendis has found ways to keep you moving forward as the reader. You get a full story in one particular issue yet you get enough of a hook to reel you in for another go round in another issue. The important thing to remember in comics, and in writing period, is that you have to keep the readers with you. Whether it be to keep them moving to the next page or wanting them interested in the world you’re creating to get them to purchase the next book in your series, you have to be mindful that the story has to move along in some way, shape, or form. If you lose readers at any point, you’re letting them down as readers and frankly, you’re selling yourself short as a writer.

Once Peter and Norman leave his office they head into his living room to watch a video that a news organization made about Norman making a comeback. There’s one page that is a great combination of art and words together that shows the anxiety and fear Peter is going through as he is trying to digest everything he had just gone through. That’s the beautiful thing about comics. The words in the scene are pure exposition. Exposition is quite the tricky beast to tell in a story because for the most part, you’re just telling the audience facts and that can be boring. You have to have some hook to give the information the audience needs to know for later in the story without boring them to tears. Think of Back to the Future. Doc Brown had a lot of information he had to tell Marty, and by default the audience, about time travel. Reading the words in the script I am sure your eyes would glaze over but Christopher Lloyd was able to give one hell of a performance that kept the audience entertained all the while telling them what they needed to know for later in the film. For this issue, we were able to see Peter getting freaked out with every second that went by and ultimately saw what drove him to run to safety.

I have to say that while I enjoyed the development with Gwen Stacy in this issue, it came a bit out of left field. It has already been established that Gwen probably has a bit of a crush on Peter, that much I get but I do not recall a scene that established she knew where he lived. Maybe, just maybe, the link is with her father, the police detective who interviewed Peter after Uncle Ben was murdered and if that were the case I wish that were better established that she took that info to head to Peter’s home. I have to say though it was great to have more Gwen in the story. One thing the Ultimate comics did was pretty much, at least for me, supplant Mary Jane Watson with Gwen Stacy as Peter’s preferred girlfriend of choice which for this universe is not a bad thing at all. I just wish we had some clue in this issue as to why she came to Peter’s house. That hint around that things are not as they should be at home, and with her pulling a knife on Kong I say DUH, but we’re basically left with her popping up at Peter’s home just cause. Folks may say it gets explained later on. Sure, yeah it does. But there could have been a little more than hinting around as to why she showed up.

Not much of consequence happens in this issue but don’t take that as a bad thing. Seeds are being planted for the future here, especially with the cliffhanger in the last panel. One thing I have enjoyed in the Ultimate line of comics is that no matter what you’re reading, Ultimate Spider-Man, Ultimate Fantastic Four, Ultimate X-Men, etc., much work was done to make sure that the universe they were creating was as cohesive as they could make it. When you’re building a universe as big as what is being presented, you have to be very careful what you’re doing. Planning has to go into making sure every character, every scene makes sense in the grand scheme of things. Some of the issue folks have with comics coming from the big two, DC and Marvel, have to do with the fact that the universes they create can become so damn unwieldy. While the Ultimate universe did end up becoming a little bloated near its end, at this stage things are still going along at a nice clip. Even a bad issue is one you can’t miss. 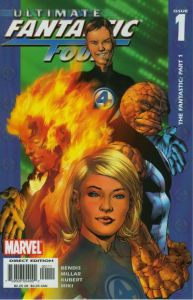 The first comic series I dove into on the Marvel Unlimited app was Ultimate Spider-Man. What a wonderful world that was created in that series. In what was essentially a reboot of the franchise, they took the character we all know and love and essentially started over. They didn’t make any real changes to the characters themselves, they just imagined what the Peter Parker story would look like if he were first bitten by the radioactive spider in the year 2000. A modern take on the origin of Spider-Man.

But that wasn’t the only series that appeared in the Ultimate universe. They rebooted a couple other franchises as well, one being The Fantastic Four. Before this, I admittedly had never read a regular Fantastic Four comic. I was most definitely aware of them of course. You can’t be a fan of any Marvel Comics character without coming across them at least once. And come on, The Thing kicks ass. A tough talking rock man who beats people up all in the name of science? What more could a comic ask for?

So this issue introduces us to Reed Richards right at birth. From day one he has an inquisitive mind that causes him to see the world much differently than the way you or I see it. From there we see him as a young man being taunted by classmates. Who comes to the rescue but one Ben Grimm, star football player? It was wonderful to see the relationship between the two. I loved how they didn’t set it up where the two met for the first time. When we first see them together their relationship is already well formed. While Ben Grimm is very much Reed Richard’s guardian angel from the bullies at his school, we see that he also realizes that Reed is the far superior one among the two. In that sense, Ben Grimm is one hell of a smart man. He knows his weaknesses and is willing to follow the folks that can help him out. I also appreciated the single minded focus of Reed Richards. Not to give too much away but Reed ends up a changed person if you follow his path from this issue towards Secret Wars and beyond. It’s nice to see that from page one, issue one we see some of the seeds of what ends up making him the character he becomes.

The main focus in this story is the introduction to the N-Zone. The Negative Zone. Reed discovers it and with the help of some dismantled household appliances, he finds a way to send his toys into the zone. Once he makes this public at a school science fair, he is recruited to join a special school in the world famous Baxter Building. Heading the group is one Franklin Storm. He welcomes Reed and introduces him to his son and daughter, Johnny and Sue Storm. Then the shocker. The Negative Zone that Reed had discovered was also discovered by the folks at the Baxter Building. Even better, they have built a machine that allows them to see into the Negative Zone. Reed was the first to actually send something there. With the two working together, we have a great seed for further issues.

What was great about this issue over all, much like other titles in the Ultimate line, was that each issue is great at giving you a story that resolves in one particular issue but gives you a reason to read further, much like old movie serials. Each issue, while it may be a part of a bigger story, still has to function as its own individual story. You never know when a reader is going to hop on board and if you don’t find a way to walk the tightrope and please both the long time readers and readers that just start with any particular issue, you will end up alienating anyone looking to start on any series. The Ultimate line was great at the tightrope act.

The art was beautiful. It was a beautiful mix of traditional Jack Kirby/Steve Ditko style of work with the added depth you would expect from a modern story. Some of the best parts of the Ultimate line of comics has been the modern takes on the classic characters. The characters as we know them are represented well but have the modern take that makes their characters in these stories unique. What I mean is, the Fantastic Four in this story are not the characters we know and love from the main Marvel stories. They are very much their own unique selves.

The depth in the pictures is great as well. As I have complained about in the past, too often stories that are supposed to be grand in scope end up looking like they are taking place in a very small room. That is not the case here, even when the story is taking place at Reed Richards childhood home. You get a sense that everything that is happening is happening in a real world environment.

The Ultimate series from Marvel have all been wonderful additions to their line of comics. They have added some extra depth to characters we all that we knew and loved already. While I was disappointed that with the Secret Wars event and the All New, All Different Marvel that is out now would involve the ending of the Ultimate universe, the fact is these comics and characters are going nowhere. Whether it be the inclusion of the characters in the regular Marvel universe or simply going back and reading the old issues on Marvel Unlimited, these stories are great ways for fans to start from the beginning with characters that have been around for ages. Do yourself a favor and read these stories. The work that was done on bringing them to life in a way that pleased both old fans and new. I could imagine that when these comics first came out, long time Fantastic Four fans may have been skeptical as to why this needed to be done. The end result proves that what is old can be new again.